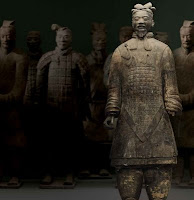 We visited the Bowers Museum yesterday. It currently has the largest exhibit of Emperor Qin's Terra Cotta Army ever seen outside of China.

“China's First Emperor, the boy king who united the country in 221 BC and began construction of the first Great wall, was not only obsessed with building but also a fanatic about death. After experimenting with potions to prolong his life, the megalomaniac king resigned himself to death on his own terms. He would build a standing army of 7,000 soldiers to enforce his rule over the afterlife.”

“Since his birth in 259 B.C., China's First Emperor was destined to become one of the most important political leaders to rule the country. Beginning at age 13, and for the next 38 years, he assigned over 700,000 workers to build an enormous mausoleum with life-size terra cotta warriors to protect him throughout eternity.

This terra cotta army of soldiers, servants, musicians, acrobats, and animals silently remained underground for two thousand years. Until, in 1974, Chinese farmers digging a well made the startling discovery of a terra cotta head.”

There was another visiting exhibit, GEMS! Colors of Light and Stone, an amazing collection of colored gemstones, diamonds, and gems.

The Terra Cotta Soldiers exhibit will be at the Bowers Museum until October 12, 2008, but the GEMS exhibit is closing in August.
Posted by Helen Foster James at 9:31 AM