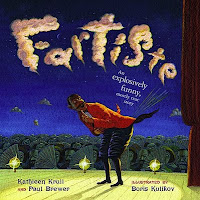 This week I had lunch with some of my favorite local writers: Kathleen Krull, Paul Brewer, Carolyn Marsden, Jean Ferris, and editor Jeannette Larson. We all had much to share about writing, favorite new reads, and the recent ALA conference.

Kathy and Paul updated us on one of their newest books. They collaborated on FARTISTE (An Explosively Funny, Mostly True Story), illustrated by Boris Kulkov (Simon & Schuster, 2008). It’s the story of Joseph Pujol, a real person, born in Marseille, France in 1847. He found he had an unusual talent and became “Le Petomane—a polite variation of the French peteur, one in the habit of farting.”

He performed in Paris at the famous Moulin Rouge and became wildly popular. Sigmund Freud kept a portrait of him in his office and Thomas Edison filmed some of his show. Pujol’s friends included Pablo Picasso and Toulouse-Lautrec.

Kathy and Paul included an eyewitness account of a Moulin Rouge performance of Le Petomane in 1895:

”I can truthfully say that I have never seen [people] laugh, cry, shout and scream as they did when this little man with his . . . deadpan face pretended to be unaware of his incongruities. People were literally writing about. Women, stuffed in their corsets, were being carried out by nurses.”

The story is told in rhyme and an “encore” section provides readers with additional information. The book has received star reviews and is a unique and fascinating new picture book biography.
Posted by Helen Foster James at 8:53 AM