Paper Son: Lee's Journey to America is fresh off the press! 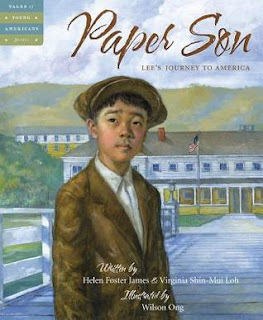 It's been my pleasure to visit with Mt Woodson Elementary School and Rosa Parks Elementary School this week. We had such a lovely time together talking about reading and writing, and students had fabulous questions for me.

Reviewed on 1 June 2013
Star Review! Twelve year-old Lee does not want to leave China. Yet the responsibility for supporting his grandparents weighs heavily on his heart. He is to be a “paper son,” and he studies a coaching book that details the life he supposedly lives with his American father so he can dupe immigration officials in California. After tense goodbyes, Lee is off across the Pacific, only to be detained on Angel Island (“the Ellis Island of the West”) with other Asian immigrants. They are treated like prisoners and fear deportation, but Lee knows that he must prove that he belongs with the family listed on his documents and is more than just their son on paper. In this poignant tale of home and heartbreak, which recalls Allen Say’s Grandfather’s Journey (1993), readers learn about the emotional toll that is part of so many immigration experiences. Ong’s lightinfused paintings match the narrative’s subdued tone, and Lee’s dignity is evident in his upright posture as he bravely faces a new life in a foreign place. It’s not a story often told for this age, and readers will be drawn to Lee’s quiet determination as he grapples with the complexity of knowing that “I didn’t want to come, but now I need to stay.”

Reviewed on 1 May 2013
Lee, 12, lives with his grandparents. His parents have died, but it was their wish that he go to America for better opportunities. In 1926, conditions are difficult in China, and the boy’s loving grandparents sadly agree that leaving would be the best thing for him. Immigration laws restrict Chinese people from entering the United States, so Lee’s family purchased a “paper son” slot for him. A Chinese man already living in America will say that Lee is his son to get him into the country. As Wang Lee becomes Fu Lee, he must learn minute details about his new family in order to pass the interrogations at the Angel Island Immigration Station. While often called the “Ellis Island” of the west, Angel Island was often about stopping immigrants rather than welcoming them. People could spend weeks, months, or even years there, waiting to pass the tests or appealing deportation rulings. Since being a “paper son” was illegal, secrecy was paramount. The story concentrates on Lee’s feelings about traveling alone to America, staying on Angel Island, and navigating the questioning. Failure would mean deportation, giving up the chance to help his grandparents, and losing the money his family paid. Large-scale illustrations, full-page and two-page bleeds, realistically portray the time and place and will help young readers with context. The authors provide a helpful summary of Angel Island history. Use with Milly Lee’s Landed (Farrar, 2006) and Laurence Yep’s Dragon Child (HarperCollins, 2008) to give young readers a fascinating glimpse into this elusive chapter of American history.

Reviewed on 23 April 2013
“Paper Son: Lee’s Journey to America” by Helen Foster James and Virginia Shin-Mui Loh and illustrated by Wilson Ong is a compelling story about a 12-year-old boy from a rural Chinese village who must travel to America to provide for his family in China.
When Lee’s parents are killed by bandits, he learns that they spent all their money and borrowed even more to buy him a “paper son slot” for Lee to go to America and live with a family, work and send money home. His grandparents work to pay off the remainder of the debt — a huge amount by Chinese standards in 1926.
The narration makes it clear that Lee and his grandparents live on the edge of poverty. “Lee knew that they needed farm equipment and a new roof. He remembered nights he’d gone hungry dreaming of steamed fish with brown sauce and long noodles with chicken and bok choy.”
And although Lee really doesn’t want to leave the only family he has left, he listens as his grandmother reminds him that, “In Gum Saan, mountains are topped with gold and streets are paved with silver. Our mountains are topped with wars and our streets are paved with bandits.”
Lee must study his “coaching book,” a book filled with information about his new family. It includes the most minute details about their life; information he must memorize so that the immigration officials will believe that he is related to his new “paper” family.
Lee studies hard and every night his grandfather quizzes him on the details. “How many windows are in the Fu house?” When Lee makes a mistake, his grandfather reminds him how important this is. If he fails to convince the authorities that he is the Fu’s son, they will lose the money and he will be deported.
The story follows Lee as he crosses the ocean and ends up in San Francisco. The passengers on the ship take a boat to Angel Island Immigration Station. There they will be given a physical exam and tested to make sure they are related to an American.
This book teaches readers about the promise of a new country and the lengths that people — young and old — were willing take to get there. The last page is about the history of Angel Island and the immigrants who entered America from the Pacific Ocean.
This picture book is for older readers. The themes (immigration, war, poverty, role playing) are perfect for third and fourth graders studying communities and the history of America.
“Paper Son” would be a great title to use when studying immigration. Teachers should use this book and one of the many books available about European immigration to compare and contrast how the immigration process worked — a study which fits in perfectly with Common Core State Standards.

Reviewed on 15 April 2013
The journey from China to the United States and the experience on Angel Island in San Francisco Bay are fraught with anxiety and peril for 12-year-old Wang Lee.
In order to gain admittance, he takes the “paper son” name Fu Lee, taking the place of someone whose records had burnt in the 1906 earthquake and fire. If he does not pass the examination on Angel Island (the Ellis Island of the West), he will be returned to China. Like many hopeful emigrants, he has carefully memorized each small detail in a “coaching book”: the number of windows in “his” house, its location vis-à-vis neighbors and other minutiae of another family’s home in China. The entire experience is expensive and traumatic, and waiting in the barracks on Angel Island is tiresome, strange and frightening, all at once. To lose family, name and everything else that one knows takes a brave person, desperate for the opportunity that Gum Saam can provide. Fu Lee meets these demands in a book that clearly shows the boy and his fears and hopes. Ong’s paintings of place and persons make the journey, setting and experience come alive. Backmatter on Angel Island provides historical context.
An effective and empathetic depiction of the Angel Island experience. (Picture book. 8-12)