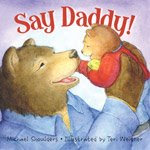 SAY DADDY! by Michael Shoulders (www.michaelshoulders.com) was one of my favorites this year. It's the perfect baby shower gift. It was published by Sleeping Bear Press (www.sleepingbearpress.com).
Posted by Helen Foster James at 7:18 AM

Labels: Book of the Day

Last night we watched the movie REWIND with Kevin Spacey and Laura Dern (as Katherine Harris). It presents the events surrounding the 2000 presidential election and the counting of votes in Florida. It’s an important reminder to each of us that every vote is important.

And, if you haven’t watched the DVD, I think you’ll find it interesting.
Posted by Helen Foster James at 7:07 AM

We've been in Mexico on a 7-day cruise on Holland's Oosterdam. We visited Cabo, Mazatlan, and Puerto Vallarta. Magician Illusionist James Cielen (www.dovemagic.com) and Joel Mason with his salute to Elton John (www.eltonjoel.com) were two of the terrific headliners. I also loved the culinary demonstrations.

It was a terrific cruise, but I'm making this "short and sweet!"
Posted by Helen Foster James at 6:56 PM

Labels: If You Want to Have Fun Follow Me, Travel

Yesterday I posted the National Book Awards, but today I want to tell you about one of my favorites of 2008: A THOUSAND NEVER EVERS a novel by Shana Burg. It received a Gold National Parenting Publications Award (NAPPA).

Here’s a summary: “In Kuckachoo, Mississippi, 1963, Addie Ann Pickett worships her brother Elias and follows in his footsteps by attending the black junior high school. But when her careless act leads to her brother's disappearance and possible murder, Addie Ann, Mama, and Uncle Bump struggle with not knowing if he's dead or alive. Then a good deed meant to unite Kuckachoo sets off a chain of explosive events.”

"Told in the first person through the eyes of a perceptive African-American girl living in the deep south during a period of racial tension and social upheaval, this first novel is a gripping page-turner. Without being didactic, the author teaches what it was like to be poor and live under the injustices of segregation."
— Parent’s Choice

If you teach or work as a librarian with sixth, seventh, or eighth grade students, you are not going to want to miss this book!
Posted by Helen Foster James at 9:57 AM

Labels: Book of the Day

The Young People’s Literature finalists for the National Book Award have been announced and you can learn more about the award and each book at www.nationalbook.org.

Laurie Halse Anderson, Chains (Simon & Schuster)
Kathi Appelt, The Underneath (Atheneum)
Judy Blundell, What I Saw and How I Lied (Scholastic)
E. Lockhart, The Disreputable History of Frankie Landau-Banks (Hyperion)
Tim Tharp, The Spectacular Now (Alfred A. Knopf)
Posted by Helen Foster James at 8:21 AM

Hooray! S IS FOR S’MORES: A CAMPING ALPHAGET is listed as #8 in the Union-Tribune on the “Local Bookstore Best-Sellers.” They were given the update by the Yellow Book Road children’s bookstore.

Now that’s something to celebrate!
Posted by Helen Foster James at 3:05 PM

Labels: S is for S'mores

I took a class today with “The Opera Singing Chef.” She is informative and funny, and her recipes are delicious.

She has some upcoming classes at the Natural History Museum and Quail Botanical Gardens that sound terrific and are listed on her website: www.theoperasingingchef.com.

If you love food, laughter, and song, she’s got a class for you!
Posted by Helen Foster James at 4:48 PM

We have crisp air and the beginning of fall leaves at our cabin so we invited some folks to enjoy a fall festivity last weekend.

Mt. Laguna is located about 70 minutes away from San Diego’s shore, but at 6000 feet elevation our San Diego mountains offer a completely different scene. I love that about San Diego—beach, mountains, and desert are all nearby to enjoy.
Posted by Helen Foster James at 6:47 AM

I met with Boy Scouts at the Yellow Book Road children’s book store this evening. The kids were terrific and I enjoyed talking with them about camping and writing.

The Yellow Book Road is the only children’s bookstore in San Diego. They have a knowledgeable staff and the store is owned by two educators.

A Laughlin We Will Go!

We just got home from Laughlin, Nevada. We went with Full Circle Tours and had a lovely time in the desert. Going on a bus trip makes this trip easy. We enjoyed a boat trip down the Colorado River, an exhibit of vintage and classic cars, plus the solitude of the desert.